End of earthquake insurance coverage
for two BC companies

Two residential insurance companies, Economical Insurance and Family Insurance Solutions, will soon cease to provide coverage for earthquakes to residents of some areas of Metro Vancouver and Vancouver Island.

Over the last 18 months, several other insurance companies in British Columbia increased the cost of coverage and deductible in case of damage due to an earthquake.

Daniel Mirkovic, President of Square One Insurance, says that many companies are responding to violent earthquakes that have occurred around the world in recent months, including several off the coast of the province.

According to the company Square One, several factors are involved:

According to experts, it is only a matter of time before a major earthquake hits British Columbia. A large earthquake takes place on the west coast every 500 years and the last one was 300 years ago.

According to an explanation by way of press release by Ms. Goss, recent data show that the risk of damage in case of earthquakes increased in British Columbia.

Ms. Goss added that because of this increased risk, it is impossible for Economical Insurance to provide coverage for earthquakes.

Approximately 20,000 customers in Richmond and the Victoria area will be affected by the cancellation of earthquake insurance announced by Economical Insurance and Family Insurance Solutions.

According to Square One Insurance, about 50% of homeowners in British Columbia buy insurance against damage due to earthquakes. 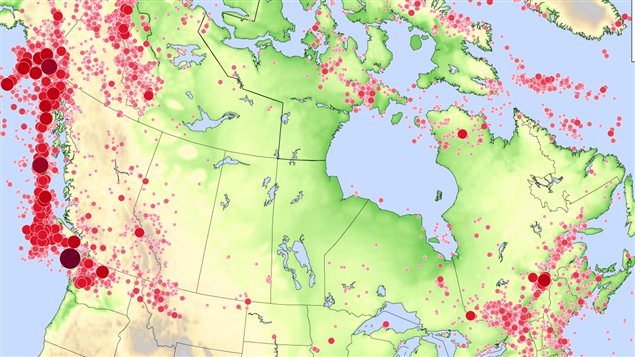 Please note:
This story was originally published in French at on Radio-Canada.ca and translated to English by using Google Translate. The image depicts a map of earthquakes in Canada between 1627 and 2010. The source of this image is Earthquakes Canada.