The allure of Craigslist contractors for your renovation job is obvious—the cost. Chances are, your Craigslist-sourced project is going to cost much less than if you hired a contractor through more traditional channels. But the true costs may be hidden. You may be putting yourself and your home at risk. And you may be breaking the law. 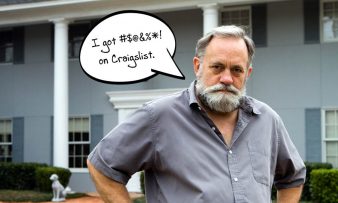 What losing $15,000 can teach us about contractors

Such is the story of a man from New Westminster, BC, who needed a handyman to build a dormer and bathroom in his home. This homeowner didn’t bother with a contract and relied on an email from the renovator detailing what the job would cost. The end result? It was a disaster.

The homeowner had saved for years to do the work. Now he’s borrowing from a line of credit to finish the botched job that the Craigslist handyman performed. At first, the project seemed to be going well. The work was plugging along, as the contractor built the walls and got the roof on. Then, without notice, the work stopped. The contractor never finished the job.

The construction was done improperly, and the dormer sank half an inch into the kitchen. There were no structural beams; everything was just thrown together. Even though he obtained a permit, the structural engineer performing the inspection failed it. In the end, the homeowner has been left with a monetary loss of around $15,000.

This type of story is not uncommon and shows how homeowners can be too trusting of Craigslist contractors. They’re left on the hook for thousands of dollars and more. Home renovation is a multi-billion dollar industry in Canada—larger even than new housing construction—so it’s not surprising that an alternative, low-cost market has sprung up.

Popular television shows like Love it or List it, House Hunters Renovations, and Holmes & Holmes are inspiring a generation of homeowners. People are turning their old homes into new and functional spaces in which they can live and grow. Drawing inspiration from television is fine, but renovating a home has real risks, especially in the hands of unskilled and/or unlicensed tradespersons.

The word “contractor” is a derivative of the word “contract”—and that is exactly what you’re going to need if your renovations go awry. Any renovation contract should be detailed enough to indicate the costs and specs involved with the work being done, and to protect the homeowner in the event things go wrong.

The contract should fully outline the roles and responsibilities of both parties (contractor and homeowner), what is to be done, and when the money is to be paid. What’s most important is to ensure the contractor or tradesman is compliant with WorkSafeBC regulations, because if that’s not the case, the homeowner is assuming a huge risk in the event someone is hurt while working on their home.

According to health and safety laws surrounding jobs such as home renovations, the homeowner needs to assign prime contractor status to a company that is working on their property. This is to protect the homeowner, absolving them of the responsibility to ensure all the workers are complying with health and safety regulations.

In British Columbia, for example, if you don’t assign a role of prime contractor to the company, you can be liable or financially responsible for any injured workers who aren’t registered with WorkSafeBC.

Unfortunately, thousands of unlicensed or unscrupulous contractors are breaking the law every day by posting deceptive ads on sites like Craigslist. Fly-by-night contractors are creating an unfair playing field in which legitimate companies cannot compete, mostly due to the low rates that these unlicensed businesses are offering.

A lot of people try to save money by taking shortcuts and turning to Craigslist to hire someone that they know nothing about.

Keep in mind that it is the homeowner that must take responsibility to evaluate any contractor:

A written contract alone is not sufficient when hiring a contractor. You need to exercise your due diligence and check out all their references, and even visit past jobs that they have worked on to see what kind of result they will give. By doing your research, choosing a reputable contractor, and getting a contract in writing, you are protecting yourself as the homeowner. That way, if anything happens to your home, yourself, or the contractor, you’re covered. If for whatever reason the job ends up in legal trouble, a contract will be binding in court.

It may seem tempting to hire someone that offers rock-bottom pricing or tax breaks on the final fee, but you’ll often get what you pay for—and then end up paying extra anyway. Beware of the so-called contractor that skips out on getting permits for the work they’re doing. You may get an unexpected visit from a city building inspector, who will promptly shut down your renovation if you don’t have the proper permits.

This could significantly delay your renovation, and in the worst case scenario could cause your Craigslist contractor to take off with your money and not finish the job at all. If caught without permitting, the homeowner has two options: obtain the proper permits (costing double the original fees), or remove the work completely.

Sites like Craigslist are having a negative effect on legitimate contractors. In fact, they are harming the business of many tradespeople by driving down labor pricing expectations. Even though these Craigslist contractors are offering low introductory rates, the homeowners often end up spending more in the long run on hidden costs and damage control.

Legitimate contractors are combatting this culture by being accountable, having pricing up front (either online or in advertising), and being totally transparent in terms of fees and work to be done. They’re also relying on word-of-mouth from past clients to help their new clients see the quality of their work and their professionalism.

If you’re about to undertake the task of renovating your home, whether on a small or large scale, protect yourself and your bank account by doing your research. Even though it might seem desirable to pay a lower price for the job, it’s often not worth it in the long run. It could end up costing you thousands of dollars above what you initially intended to spend.

Finally, it’s important that home and condo owners undertaking renovations, verify the liability and workers’ compensation coverage of contractors. To be as protected as possible, make sure the contractor has proper licenses, solid references, and both workers’ compensation and commercial general liability insurance coverage. Most home insurance policies require owners to notify their insurance providers of any renovation costing more than $5,000.

Check out this guide for more information on homeowners insurance, or to get a home insurance quote in under 5 minutes.

Want to learn more? Visit our Homeowner resource centre for more articles created specifically to help you navigate homeownership. Or, get an online quote in under 5 minutes and find out how affordable personalized home insurance can be.