Square One warns bike thefts are on the rise

(Vancouver, BC): Square One recently secured and compiled bike theft trends from 6 major cities across Canada. The result? The total number of bike thefts in these cities increased 31% between 2014 and 2015.

Edmonton had the greatest year-over-year increase in bike theft, with thefts more than doubling. Bucking the trend, bike theft in Montreal dropped by nearly 8% year-over-year. Figures for each of the cities surveyed are provided below. 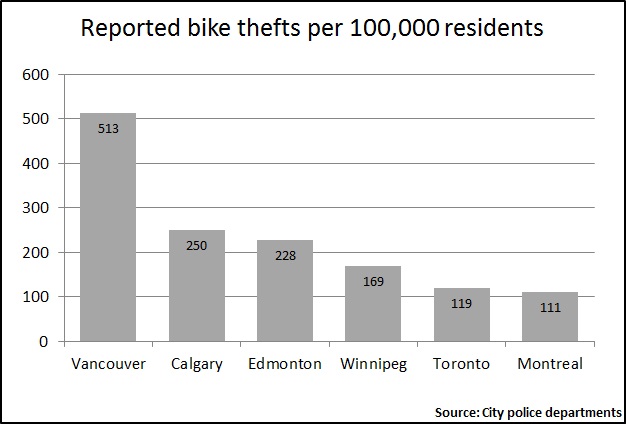 Bike theft is common and rising in most major Canadian cities because the crime can be committed in a short period of time, reducing the risk for the thief. In addition, bicycles are easy to transport and can be sold to unknowing vendors or individuals in the same day.

Edward Collins, a Vancouver resident, fell victim to bike theft and vandalism in January when both his and his wife’s bicycles were stolen from their apartment locked storage unit. “The thief had somehow ripped the metal bracket off the wall and then proceeded to vandalise my bike and steal the wheels and some other things off it,” says Collins. “I am not sure why he didn’t just take the whole bike, because he left the frame there all bent and buckled.”

Collins’ bicycle cost nearly $2,500, but meant much more than that to him. “My bike was made for me by a close friend,” says Collins. “It’s a tough emotional impact because of what it meant to me; I saved up for so long to buy that bike but now it’s just gone. I also no longer had the option to ride to work.” Although his bicycle was destroyed, Collins was able to purchase a new bike after he submitted an insurance claim through his home insurance provider.

“Consistent with what most police departments across Canada are reporting, we are seeing an increasing number of stolen bicycle claims,” says Daniel Mirkovic, President at Square One Insurance. “We predict the rate of stolen bicycles will continue to increase as bicycle lanes become more popular and more bikes are on the road.”

Bike thefts generally peak during the months of August and September, so Canadians are urged to take necessary precautions to avoid falling victim to bike thieves. The most common five tactics to avoiding bike theft are:

To learn more about your bike insurance options, speak with your insurance provider or call Square One at 1.855.331.6933. For more home insurance tips, visit www.squareone.ca.

Established in 2011 and based in Vancouver, British Columbia, Square One offers the only home insurance policy in Canada that can be personalized to your unique needs. That means you only pay for the protection you need. Square One is also one of the few providers to automatically include earthquake, sewer backup and broad water protection in its policies. Square One currently serves British Columbia, Alberta, Saskatchewan, Manitoba and Ontario. For more information about Square One, or to get an online quote, visit www.squareone.ca.