Do you know what kind of plumbing is hidden inside the walls and floors of your home? It’s not something you think about a lot, if it’s working properly. But if your home has Poly-B plumbing, you definitely want to know about it. Odds are, it’s already caused some problems.

What is Poly-B plumbing, what does it look like, and why is it such an important issue? Read on to find out. 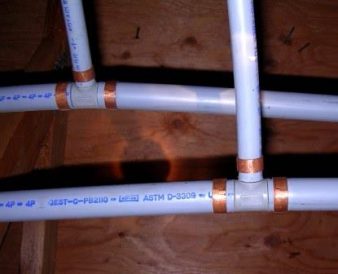 What is Poly-B (Polybutylene) Plumbing?

Poly-B (short for polybutylene) pipes were, at one point in time, a popular material for home plumbing systems.

From the early ‘70s until the early ‘90s, Poly-B piping was installed extensively in new homes. At the time, plumbers thought it a fantastic material. It was flexible, easy to install, and much cheaper than copper.

However, by the mid-‘80s, a pattern started to emerge: homes with Poly-B plumbing were experiencing leaks. Some Poly-B plumbing would leak slowly — hidden behind drywall — and the homeowner wouldn’t discover it until it was too late. These homes had not just water damage, but also mould.

There are as many as 700,000 homes across Canada with Poly-B plumbing.

How do you tell if your home has Poly-B?

Most Poly-B pipes are grey, though other colours (like black, white, or blue) exist.

If you’re not sure whether you have Poly-B plumbing, look for gray plastic pipes anywhere there is exposed plumbing: under the sink, connected to the water meter, at the hot water tank, or on the ceiling of an unfinished basement.

Poly-B plumbing systems often have plastic fittings connecting the lengths of pipe, though copper fittings appear sometimes as well. Copper- or brass-fitted Poly-B systems are reportedly quite common in Alberta, for example. 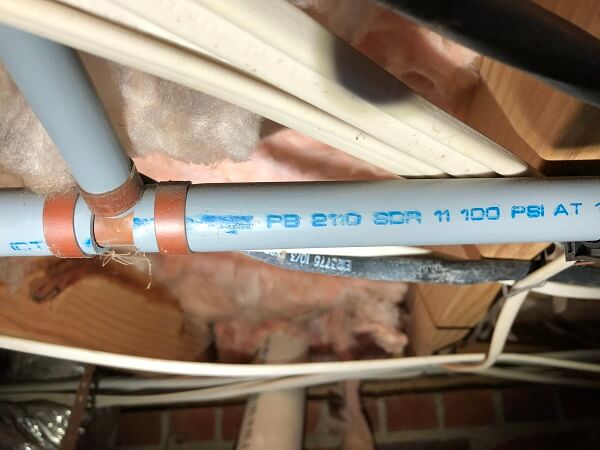 One other way to identify Poly-B plumbing is by the markings printed on the pipes. Poly-B pipes usually have an identifying code stamped on the side: either “PB2110” or “CSA-B 137.8.” The absence of these codes doesn’t automatically mean it’s not Poly-B; if your home’s plumbing meets all the other criteria, it could still be Poly-B.

If you suspect your home’s pipes are Poly-B but you can’t confirm it, contact a plumber to arrange an inspection. With Poly-B pipes, you’re better safe than sorry.

Risks with these types of pipes

The first problem with Poly-B has historically been the fittings.

The fittings, used to connect one pipe to another, are often plastic. These fittings are prone to cracking and leaking over time. In some cases, the fittings weren’t installed correctly. They’ve often been over-tightened, causing the pipes themselves to crack.

Poly-B pipes are also prone to damage from water pressure and heat. Most home plumbing systems have to deal with both of those things, making Poly-B a poor choice.

Chemicals like chlorine slowly degrade polybutylene. Even in the tiny doses sometimes present in municipal water supplies, such chemicals can harm Poly-B pipes and lead to leaks.

While a cracked pipe often leaks enough that you’ll discover it quickly, degradation from heat or chemicals can take a long time, and it starts from inside the pipe. Poly-B plumbing may appear perfectly fine on the outside while being ready to rupture at any moment. There’s just no way to tell.

It’s difficult to judge the condition of Poly-B piping. Home inspectors can look for obvious signs, such as visible repairs or improper installation. But damage to the pipes begins from the inside where you can’t see it.

InterNACHI (International Association of Certified Home Inspectors) advises that leakage can happen without any warning. Plumbers recommend replacing Poly-B pipes with something else (such as PEX or copper). Not only might you have difficulty getting insurance, but Poly-B plumbing can discourage potential buyers from purchasing your home if you ever decide to move.

There are things you can do to extend the life of the Poly-B pipes, but most experts say that the best solution is usually to replace the entire system.

Take a look at Jon Eakes’ website. He has asked Canadian homeowners to write in if they’ve had issues with their Poly-B plumbing. It’s quite an eye-opener.

There are quite a few factors that can raise or lower the cost. Obviously, a larger home with a more extensive plumbing system will cost more.

However, aside from the material and labour costs for replacing the plumbing itself, there’s the added cost of actually gaining access to the pipes. Replacing a whole plumbing system means tearing up flooring and opening walls — an expensive undertaking.

However, if you leave it too long and your Poly-B pipes start to leak, you might find yourself having to pay for remediation of water damage and mould on top of the Poly-B replacement cost.

What can you do to maintain your Poly-B plumbing?

If you have Poly-B plumbing in your home, it is almost inevitable that you’ll be replacing it at some point. But there are a few things you can do to extend the life of the existing Poly-B:

In the early days of Poly-B piping, the fittings in some areas were made of plastic, and tended to fail over time. This is less common in Canada than in the U.S. If your fittings are plastic, you might consider getting a plumber to replace these with copper or brass fittings.

You’ll notice that the pipes are held in place with metal bands. If these are crimped too tightly, they can cause hairline fractures. With fractures come leaks, so this is an important step.

Pressure-reducing valves are available and are designed to reduce the water pressure in your house, allowing for less stress on both the pipes and the fittings. Most experts recommend between 40 and 60 psi. High water pressure can also damage the home’s fixtures.

Hot water causes Poly-B pipes to deteriorate faster. Turn down the temperature on your water heater, but be careful: turning it too low can cause bacteria to grow. Poly-B pipes should not be connected directly to the hot water tank.

BC Hydro recommends setting the tank to no lower than 55 °C to prevent bacteria forming in the tank. Other sources say you can go as low as 49 °C, but no lower. Setting the water to a lower temperature also reduces the risk of scalding, not to mention saving you money on your energy bills. See the hot water tanks guide for more information.

What is the life expectancy of Poly-B plumbing?

There are many reports that Poly-B piping begins to leak around 10 to 15 years after installation — meaning any Poly-B piping currently in use is well inside the danger zone.

Most experts recommend replacing Poly-B plumbing with the much more durable copper variety. Poly-B is no longer an approved plumbing material under the National Plumbing Code, so is not used in any new plumbing installations.

It may seem expensive to replace all the plumbing in your home, but you’re investing in your home’s resale value. You’re also giving yourself the peace of mind of knowing you won’t be facing burst pipes damaging your home or your valued possessions.

The issues with Poly-B plumbing were so widespread that a series of class action lawsuits launched across Canada and the US in the ‘90s and early ‘00s.

These lawsuits concluded with hundreds of millions of dollars in damages awarded to homeowners who had Poly-B installed in their homes.

Unfortunately, the deadlines to make a claim for damages through any of the lawsuits has long passed; most deadlines were in or around 2005. Homeowners who still have Poly-B in their homes are unfortunately left to pay for the replacement themselves.

What will your home insurance company want to know?

Your insurance company will want to know what type of plumbing your home has, especially if it was built between the early ‘70s and the early ‘90s. Losses from ruptured Poly-B plumbing can be enormous, so insurers are understandably nervous about taking on a home where Poly-B plumbing is lurking. You may find that insurers won’t insure you at all, or they’ll impose a higher premium or water damage deductible.

If you already have insurance on your home, and have a water loss due to the Poly-B plumbing leaking or rupturing, you could face a huge increase in your premium or deductible on renewal. Even worse, your insurer may not renew your policy, and you’ll need to find a new insurance provider willing to take on the risk. This is never an easy task, especially if the loss you suffered was a large one.

If your home has Poly-B piping, contact Square One and discuss it with one of our agents; we’ll do our best to assist you. Or get started with a free quote.

Is Poly B the same as PEX?

Poly-B pipes are not the same as PEX pipes. PEX is short for “cross-linked polyethylene,” which is a different type of plastic than polybutylene.

PEX is manufactured using a different method, and the result is a plastic pipe that’s much better for home plumbing. PEX can stand up to heat, pressure, and trace chemicals much more effectively than Poly-B. PEX is common in modern homes, whereas the use of Poly-B has been entirely discontinued.

Will poly pipe freeze and burst?

Yes, Poly-B piping is susceptible to damage from freezing. If you have Poly-B pipes in your home, make sure you take all the recommended precautions against frozen pipes and winterize your home — especially if you’ll be away from home during cold weather.

Should I buy a home with polybutylene pipes?

If you’ve found a home you want to buy, the presence of Poly-B piping shouldn’t automatically disqualify it if everything else is in good order.

However, make sure you know how you’re going to address the plumbing issue before you make an offer on the house.

If you’re going to replace the system yourself after you’ve taken possession, make sure you’ll be able to find home insurance for the house in the meantime.