You’ve got all kinds of drains in your house; every sink and tub has a drain, and there’s likely a drain next to your washing machine. But did you know that there is a very important drain located outside your home? This is known as your perimeter drain or weeping tile system. If this system isn’t operating properly, you are going to end up with a wet basement or crawl space. 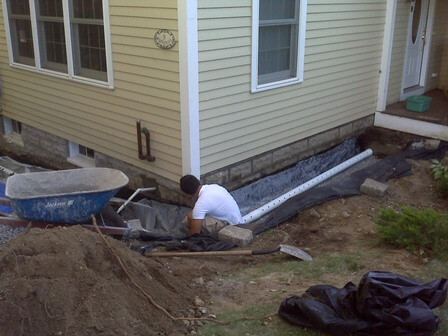 What is a perimeter drain system?

A perimeter drain is something that all houses have, and it is designed to prevent water from seeping into your basement. It is intended to attract water in the soil that has either accumulated from heavy rains, melting snow, or from rising groundwater. It then carries the water away from your house, so it is less likely to seep in through your basement walls. You often hear it referred to as ‘weeping tile.’ Many years ago, actual clay tiles were used to divert water, and the name has stuck even though tiles are no longer used, but rather perforated pipes. It is also sometimes referred to as a French drain, because this drainage method was popularized by Henry French of Concord, Massachusetts back in the 1800’s.

A perimeter drain, or weeping tile, is a plastic or PVC perforated pipe, which is installed underground, around the perimeter of your house. The perforations consist of thousands of tiny holes or slits that allow water to enter the pipe, and be drained away from the foundation of the home. The pipe is normally covered by a mesh permeable “sock” which helps to prevent soil from getting into the pipe. It is then covered by layers of gravel of graduated sizes (largest close to the pipe, followed by smaller gravel), and finally backfilled with soil. The gravel allows water to flow towards the drainage pipe, without allowing dirt and debris to clog it up. The weeping tile is installed in such a way, so it slopes away from the home, and carries the water towards the main sewer system.

When a house is constructed, a certain amount of dirt around the perimeter of the home is excavated. Once construction is finished, this dirt is put back into place, making it looser than the untouched soil next to it. Therefore, water runs more easily through this soil, which just happens to be right next to your basement or crawl space walls. This is one of the reasons it’s so important to have a good perimeter drain to get that water away from your house. Hopefully, when the contractors finished installing the perimeter drainage system, they took the time to firmly tamp the earth into place, and make sure that the soil slopes away from the house to improve drainage. Proper sloping, in addition to properly functioning perimeter drains, is absolutely key in preventing water seepage. Most experts recommend a downward slope, away from the foundation, of 2.5 to 6 inches over a distance of 10 feet.

When a home is originally constructed, the builder is responsible for ensuring the proper grading is achieved and will need to pass an inspection by a surveyor for the municipality, province, or state. It then becomes the homeowner’s responsibility to maintain the proper grade. If you plant trees, lay new sod, or put in a pool, you could be changing the way water drains away from the home. If you’ve unintentionally caused water to run towards your neighbour’s property, you could be facing a lawsuit and will be responsible for any expenses to correct the situation.

Armchair Builder has a great video on drain tiles.

Over time, perimeter drains can become clogged by dirt, roots, or other debris and will then be unable to carry water away from your house. If the perimeter drain is clogged, water may seep into your concrete basement wall because it’s got nowhere else to go. Concrete is not impermeable, so it is very important to keep the water running away.

Older homes sometimes have clay or concrete weeping tiles, which do tend to deteriorate, collapse, and become blocked with dirt and roots as they age. You may need to replace the whole system with modern plastic weeping tile, or in some cases, you can simply replace the damaged sections.

If the tiles have a blockage, but they haven’t collapsed, you may be able to have the system flushed. A professional can dig access points around the basement walls to access the drain and clean it out. Some older drain pipes have ridges on the inside which make it impossible to clean. These would probably need to be replaced.

When the perimeter drains are installed, a layer of gravel is generally placed on top of the perimeter drainage system, before the dirt is filled back in. This should prevent clogging. However, if the system is clogged up, there’s not much you can do besides having the whole area dug up again, and the pipes replaced.

If you are replacing your system, consider having a clean-out port installed. This type of port can be accessed from the surface, so there is no digging up to worry about should the system need cleaning at some point in the future.

Connected to a sewer system?

Some older homes were constructed with the perimeter drainage and weeping tile connected directly to the sewer system, which is not designed to handle large volumes of runoff. If your home’s weeping tile or perimeter drainage system is connected to the sewer, you may be at risk of contributing to an overload of the system, which can cause water backups. You may want to consider disconnecting your home’s drainage from the sewer system.

A couple of indicators of a drainage problem are:

What can you do to maintain your perimeter drain system?

Who thinks about their perimeter drain system? It’s underground, you never see it and you probably never think about it until something goes wrong. But you can, and probably should, have an inspection done periodically, especially if you have noticed water stains on your basement walls, or pooling water near your foundation, as mentioned above. Companies can come to your home, and by inserting a camera into the perimeter drain, can see if the drain is functioning properly or if there are any potential problem areas. Sometimes a cleaning may be all that is necessary, rather than a repair or total replacement.

Check out Rain Tek. It’s a company based in Victoria, BC, and its site clearly explains the process involved in doing a drain tile camera inspection.

Perimeter drains or weeping tiles can last for decades. If properly installed, you can expect to have a problem free basement for a very long time. Older clay weeping tiles tended to deteriorate, and become clogged with soil and tree roots, but even these systems lasted for many years. With modern materials, you can expect an even longer lifespan for your perimeter drain system.

What will your home insurance company want to know?

Insurance companies will want to know if you have had any water in your basement. They may also ask about the condition of your foundation. A cracked foundation puts your basement at serious risk of water damage, and of course, damage by mould if the water damage isn’t addressed right away. Making sure your perimeter drain is working properly is one of the many things you can do to help waterproof your basement.

While some home insurance policies cover “flooding,” be sure to read your wording, or talk to your insurance agent, to fully understand what types of water damage are covered and what types are not. Some policies will cover “rising ground water,” some won’t. Seeping of water into the basement is almost never covered by insurance, so it is even more important for you to take the proper steps to prevent it. Removal of mould is also another cost that is not normally covered by home insurance. The cost to clean up the resulting mess, and make any necessary repairs will be coming out of your own pocket. You may want to spend some money now to make sure your perimeter drainage system is in good repair and is working properly. Or, you could be facing even larger expenses later to repair any water damage to your home, as well as damage to property in your basement, that is not covered by home insurance. After all is said and done, the cost to maintain a working perimeter drain system is likely much less than the damage that can result from a broken system.

Always get a home insurance policy which provides the broadest form of water damage coverage possible, and be sure you know what is covered and what is excluded before anything happens.