Frozen pipes and your home insurance

In Canada, winter means lots of snow, ice, and freezing winds. It makes us dream of a winter vacation to some glorious hot spot!

One of the most significant dangers to your home during periods of freezing weather is frozen water pipes. Frozen pipes can burst, and cause thousands of dollars in water damage. Luckily, there are a few things you can do to help prevent this.

Here’s our look at preventing frozen pipes, and protecting your home if you have to leave it alone during the winter: 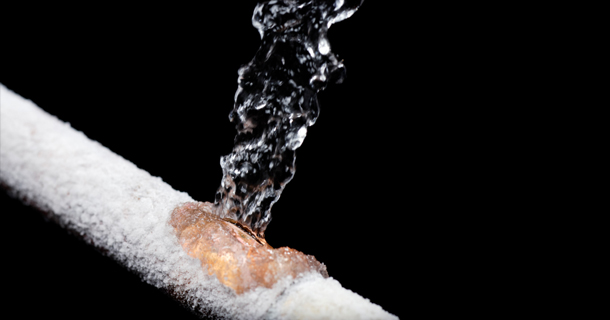 How to prevent your pipes from freezing

Whether you’re at home all winter or taking a trip, you should take a few precautionary steps to protect your home’s water pipes from ice cold temperatures.

That last part is particularly important; the most destructive pipe freezing events happen while homeowners are away for extended periods. What’s more, many insurance policies actually require someone to monitor your home during the winter in order to have coverage for burst pipes.

Let’s talk more about that.

Have you considered what would happen if the power went out while you were away, and if temperatures dropped low enough to freeze your water pipes?

Water can easily begin pouring out of frozen, burst pipes, causing thousands of dollars in damage. Most Canadians believe that home insurance will cover this kind of damage; in many cases this is true, but coverage for water damage can be tricky depending on where you buy your home insurance policy.

Most home insurance policies have a restriction stipulating that if you are away from your home for more than a few consecutive days during the winter, you either need to shut off your water supply and drain the pipes, or have a competent person checking your home daily to make sure heat is being maintained.

This restriction varies from one company to the next, but you can be pretty sure there will be a strict requirement to safeguard your home while you’re away.

If you fail to meet this requirement, your home insurance company will deny any claims for water damage that result from frozen pipes. Given the high flow rate of modern water supply lines, this can potentially mean entire homes flooded with water, and thousands of dollars in repair costs — all coming out of your own pocket.

A couple in Ontario came home from a winter vacation to discover their home in shambles. They had turned off their water before heading to Florida for the winter but did not shut off their indoor fire-suppression sprinkler system because building code requires that their sprinkler system always remain operative.

The pipe leading to the sprinkler heads froze and burst, releasing water throughout their townhouse and causing extensive, expensive damage. Their insurance company denied the claim, stating that all the water, including the fire sprinkler system, should have been shut off and drained since the homeowners were away for more than a few days.

A woman was in hospital undergoing emergency cancer treatment. She had been away from home for three weeks when her furnace went out. The pipes froze and burst, causing significant damage to her home. While she was away, she had a neighbour keep an eye on the house and pick up the mail — but because the neighbour didn’t actually enter the house every day, insurance coverage was denied for the water damage.

Many people are unaware of this standard exclusion on home insurance policies in Canada. Even if you are aware and try to comply with the conditions, a requirement to leave sprinklers operative, or a sudden medical emergency, could put you in a very difficult position like those seen above.

How does it work with Square One?

At Square One, we have taken firm steps to prevent these kinds of disastrous surprises for our customers. Our goal is to provide the broadest form of protection possible for the homeowners, condo owners and tenants whom we insure.

If Square One customers are temporarily away from home during the usual heating season, for 7 days or less, they don’t need to take any extra steps to keep their insurance in effect.

We know that our customers like to travel during the winter, and we also trust our customers to properly prepare their homes for their time away. That’s why our policy doesn’t impose an arbitrary requirement for temporary time away, up to 7 consecutive days.

If Square One customers will be away from home for more than seven days, our policy only requires that they take one of the following options to protect the home:

Going even further, we took steps to make sure that our customers are taken care of if they suffer an emergency and aren’t reasonably able to take one of the above two protective measures.

If a Square One customer is unexpectedly away from their home to receive treatment for a medical emergency, our policy will continue to cover water damage due to freezing. We know that our customers’ health and safety is of the utmost importance, so we designed this portion of our policy to support them when emergencies get in the way of ordinary winter concerns.

We know how cold Canadian winters can be. When you’re lying on the beach, or undergoing emergency medical treatment, the last thing you need to worry about is complying with restrictive conditions on your home insurance policy.

Want to learn more? Visit our Home Insurance Basics resource centre for dozens of helpful articles to guide you through the ins and outs of home insurance. Or, get an online quote in under 5 minutes and find out how affordable personalized home insurance can be.