Water damage claims are on the rise due to faulty plumbing materials, failed connections, human error, and burst pipes. With water damage claims more than doubling both fire and break-ins combined, you should consider a complete water leak detection device to protect your home and your belongings.

What is a water leak detection system?

There are many water leak detection systems on the market. Some simply sense that water is present and sound an alarm. If you’re home, you will then know to run and shut off your water. But if you’re not home, an alarm won’t help and the water is just going to continue to run.

A much better form of leak detection system is one that is a “flow interrupter.” This is a system that will actually “interrupt” the flow of water if it detects a problem.

One water leak detection device available to Canadians is the AquaTrip. The AquaTrip is a permanently installed automatic water leak detection and system shut-off device that will minimize water loss and reduce damages caused by leaks and burst or frozen pipes. The AquaTrip monitors the flow of water into a property and will automatically shut off the water supply if a leak is detected. The devices are fully programmable to fit most properties, with no interference of normal water use. 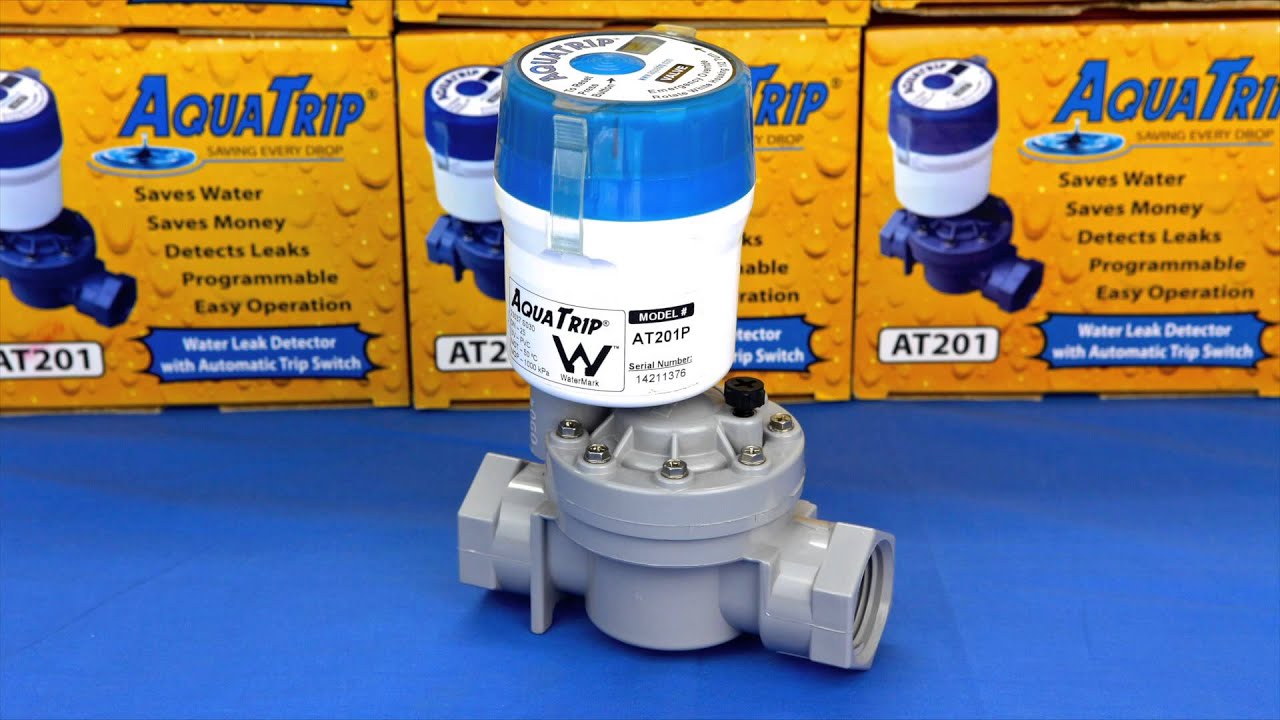 A flow-interrupter leak detection system can actually shut off the water when the system senses an excess flow of water beyond a pre-set limit. This type of detection system is normally installed by a professional, and in some cases, in addition to shutting off the flow of water, they can also send text messages to your smartphone to notify you that a leak has occurred. Some devices can also notify you if the batteries are running low, or if a low temperature is detected. If the temperature has dropped to a dangerous level, and the system will shut off the water before the pipes freeze and burst. Water sensors are often placed throughout your home close to plumbing fixtures, pipe seams, and any appliances, such as dishwashers and washing machines.

The AquaTrip is an example of a unit that is installed permanently on the main cold water supply at its earliest point of entry into a property. Using sensors, the device will recognize the flow of water from 30ml a minute or one drip per second all the way up to the full flow of water. After the water has flowed longer than a pre-set amount of time, it will activate shutting the water supply off to the home completely. The AquaTrip also has numerous settings to suit your living situation such as:

As mentioned, water leaks are a very common occurrence. Hot water tanks have a certain life expectancy and require maintenance as well as replacement when the life expectancy limit is near. These have a tendency to leak, or even rupture, over time. Another common source of water damage is burst pipes due to freezing. If you’re going away during the winter season, it’s a good idea, and is, in fact, a requirement by most insurers, that you have your home frequently checked to make sure heat is being maintained.

Polybutelene pipes were used in Canadian homes from the early 70’s to the early 90’s. These have a history of leaking and are no longer being used in new home construction. Dishwasher and washing machine hoses can wear out and leak, and should be replaced with braided hoses. Even braided hoses have a life expectancy. Toilet tanks have been known to crack, spilling water everywhere. The toilet continues to run and run, attempting to fill up the tank, causing incredible damage, especially if you’re not home, and it continues for hours, or days.

So no matter how diligent you are, there is always a chance of water damage in your home. A leak prevention device can really help to limit the damage, by shutting off the water before it becomes a full-on catastrophe!

If you have the AquaTrip installed on your main water supply line and experience a leak, the device will minimize the amount of water damage you experience compared to if you did not have your home protected with the AquaTrip. In most cases, leaks that go unnoticed can cause more damage than an obvious failure in your home due to the time it is left running. The device will pick up this flow the minute it starts, notify you after the leak has surpassed the pre-set amount of time, and will limit the amount of damage done to your home. Should you be concerned about the level of damage, consult your insurance provider for an educated opinion on what you should do.

If you feel something is wrong with your AquaTrip unit, it is highly recommended you contact both your insurance provider and Damage Control Pro immediately.

What can you do to maintain your system?

You really want to know that your leaks detection device is going to work as it’s supposed to, should a leak happen. As with everything, maintenance is key.

The AquaTrip, as an example, requires very little maintenance. If you live in an area with known hard water, you may have to wash the screen in the event the screen gets blocked due to the hard water. If the screen gets blocked, the device will notify the user: “No flow registered for 24 hours, the device may require cleaning.” To ensure your device is working properly, you should intentionally cause the unit to trip every six months. This will ensure that it is shutting down and turning back on when it should. This will also confirm that the solenoid is active. You could also arrange an annual inspection.

With proper maintenance the AquaTrip is expected to last the life of your home.

Your home insurance provider may want to know if there is a leak detection system installed in your home as this could have an effect on the rate charged for your home insurance. Some of the costs involved after a water damage loss include structural repairs, mold remediation, replacing damaged furniture and appliances, as well as the cost to live in a hotel or other rental accommodation while repairs are being done. If you have taken steps to prevent this type of loss, by installing a leak detection system, you could see a discount on your home insurance premium.

Keeping your home dry and safe is important to both you and your insurance provider. The cost incurred to install leak detection system may be a lot less than the expenses involved in repairing the damage to your home and valuable possessions caused by a major leak.

Are there any municipal or provincial subsidies available?

At this time, there are no municipal or provincial subsidies available in Canada for the AquaTrip or other leak detection systems. Should this change, this article will be updated with how and where you can apply.

How can I prevent water damage to my home?

Installing a water leak detection device is certainly a step in the right direction! However, there are many other ways water can enter your home, such as sewer back up, heavy rains, and inland floods, to name but a few. Sometimes there is nothing you can do to prevent water coming in, but you can take some steps to minimize the damage to your property: