Signing a lease with a roommate

Something to consider when moving in with a roommate is who is going to sign and be named as a tenant in the rental agreement with the landlord. In some cases, all tenants are named in the agreement. In other cases, only one person is named, however, as a rule, the landlord has the right to know who is living in the unit, and roommates should be listed as tenants or occupants.

Here, we’ll go over what you should know if you’re signing a rental agreement along with a roommate. 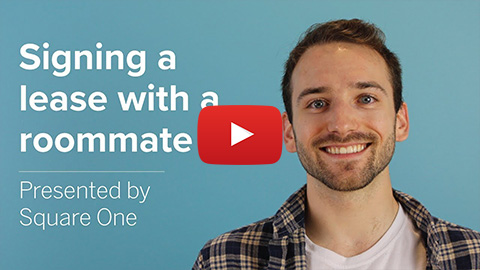 What is a rental agreement?

The rental agreement, often referred to as the lease, is a document that describes the location, length of the tenancy, amount of the rent, and the responsibilities of the parties involved.

In some provinces, it is mandatory to complete and sign a written rental agreement, while in other provinces, an oral agreement is fine. A lease is actually just one type of rental agreement and is usually binding both parties to a certain time limit, such as six months or a year. During that time, there can be no changes to the agreement unless both parties agree. For instance, the tenant must pay the rent every month for the agreed term, and the landlord cannot increase the rent during that time.

What types of tenants are there?

Although there are similarities between provinces, there are also some differences, in the types of tenancy and the rights that go along with them. Be sure to check the Residential Tenancy Act in your province.

In BC, for instance, according to the Tenant Resource and Advisory Centre there are 3 main types of roommate situations: co-tenants, occupants, and tenants in common.

This is the most common arrangement. Co-tenants are two (or more) roommates sharing one lease agreement. Both tenants are equally responsible for paying the rent, as well as making any necessary repairs if they cause damage to the premises.

How the costs such as utilities, insurance, and cable, are divided up and would be decided by the tenants themselves, hopefully in a signed Roommates Agreement. If one of the co-tenants wants to move out, they can provide notice, in writing, to the landlord.

If just one of several co-tenants move out, that would typically end the lease agreement with the landlord and require the remaining tenants to sign a new one. This can be avoided by finding a new roommate to replace the departing one.

If you’re the tenant moving out in this scenario, make sure you notify the landlord as required. Co-tenants are jointly liable for the rent, which includes you until you go through the proper process of moving out.

Tenants in common are two (or more) roommates each have their own individual rental agreements in place with the landlord. When it comes to paying rent, each roommate pays the landlord the individual amount owed.

If one roommate moves out or defaults on their payment, the other roommate is not affected. It is also possible that both tenants are named on the same rental agreement, but are considered Tenants in Common, as long as the agreement specifies the amount of rent each must pay.

An occupant is someone who is not named on the rental agreement but is renting part of the accommodation from the tenant, rather than the landlord.

Occupants don’t have rights under the law the same way tenants do. If the tenant throws the occupant out and changes the locks, the occupant has little or no recourse.

Anyone living as an occupant would be well served by working with the tenant and their landlord to be added as a tenant to the lease agreement. Otherwise, if there is any kind of dispute, you would have to seek legal advice outside of the Residential Tenancy Act.

How can I be sure of my rights?

The laws governing landlords and tenants vary from province to province.

If you’re renting a home in any capacity, you should take the time to learn the rights you have as a tenant in your province. Check out the following list of provincial websites and their respective documentation on tenant rights.

What if you want a new roommate to move in?

Say you and your current roommate have signed a rental agreement with the landlord and a Roommate Agreement with each other.

Now you want a third roommate to move in to help with the rent.

First, you should contact the landlord, and get approval. A good landlord will likely want to check this prospective roommate out as thoroughly as he did with you and your existing roommate—credit history, rental history, references, and so on. He may also want to ensure that the unit can legally be occupied by three people.

If everything checks out, you can amend the lease agreement so all three of you are named. This protects the landlord by making the new tenant liable for payment of damages, rent, and any of the other applicable obligations.

Second, you should amend your roommate agreement to cover the responsibilities of all three.

When deciding to sign a rental agreement with one or more roommates, be sure you know what you’re getting into. Review the laws in your province, know your rights, carefully review the rental agreement before you sign, and know what steps to take if your relationship with your roommate goes south. Having everything documented in a solid roommate agreement can go a long way towards preventing problems from arising, or finding a solution if they do.

Want to learn more? Visit our Renter resource centre for more tips and information about life as a renter. Or, get an online quote in under 5 minutes and find out how affordable personalized home insurance can be.

About the expert: Nina Knudsen

Nina Knudsen has 12 years of property management experience under her belt. Nina is part of the team at Royal LePage Sussex, bringing her experience to the company’s Property Management division as the Managing director of the Hello Rent team.